The largest island in the group is Bazaruto Island,filled with fresh water lakes inhabited bycrocodiles, exotic butterflies and many species of birds. The island itself is home to some 125 different species of birds. Benguerra, south of Bazaruto, is smaller but with similar geography and wildlife.

The islands are covered by large sand dunes and freshwater lakes, which are nesting grounds for black-winged Flamingos. They are also home to small herds of red Duiker antelope as well as freshwater Crocodiles and samango Monkeys.

The closest island to Vilanculos is Magaruque and is small enough to make a day trip worthwhile as you can walk around the island in a couple of hours. Santa Carolina is the smallest island and is surrounded by the deepest waters of the islands making it ideal for game fishing.

For wildlife lovers one of the chief attractions must be the prospect of seeing dugong, now threatened with extinction in many other parts of the world. These mammals are seen regularly in the waters around the islands, as are Dolphins, Turtles and humpback Whales. For those with an interest in the history of the islands, there are the ruins of a 19th century fort on Magaruque and a lighthouse on Bazaruto, which is just over one hundred years old. With the exception of Santa Carolina, all the islands have accommodation.

Did someone mention fishing? 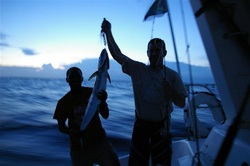 Being on the edge of the deep Mozambique Channel, the Bazaruto Archipelago is Africa’s most productive area for black, blue and striped marlin as well as sailfish and warm water game fish such as giant kingfish, wahoo, king mackerel, dorado and bonito. October to March are the prime marlin months and June to September the best for sailfish. Many other species of fish are caught all year round and the lodges support tag and release. Boats can also be hired for fly and game fishing. Fishing equipment is available at all lodges.